An increasing number of women are taking to social media to discuss their lives as ‘submissive’ wives and girlfriends in a trend which has seen them ditch their jobs to look after their partners full-time.

Videos on TikTok, under hashtags including #submissivewomen, #submissivewives, and #tradwives, include both men and women discussing the lifestyle, what it means to them, and why they enjoy it.

Among the thousands of videos online are ones featuring US and UK housewives discussing how happy they are to have ditched feminism and replaced it with ‘femininity’, opting to relinquish financial independence and control, and replace them with domestic chores and subservience to their husbands and boyfriends.

Well-known UK tradwife Alena Kate Pettitt, founder of lifestyle website The Darling Academy, writes on her blog that she ‘learned to love [herself] and [her] feminine identity’ after an early midlife crisis ‘left [her] shattered emotionally and wondering why the world, despite all its opportunity made me feel so unsatisfied with [her] life, and how [her] supposed “modern and empowering” choices had destroyed [her] self-esteem’.

She ditched her stressful London career for a ‘a traditional homemaker’s life in the Cotswolds’, which includes living off an allowance given to her by her husband, and which, if she’s frugal with expenses, is allowed to keep for herself.

According to Alena, she has never been happier.

UK tradwife Alena Kate Pettitt, founder of lifestyle website The Darling Academy, says she has never been happier since becoming a traditional housewife 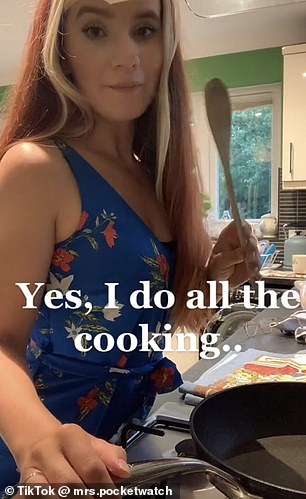 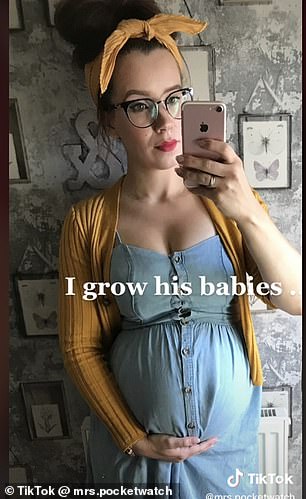 For UK TikTok creator Mrs Pocketwatch (pictured), who has used hashtags inclduing ‘tradwife’ and ‘antifeminist’ in her content, being a housewife gives her fulfilment, and she says that is why she does it

Elsewhere, submissive wife Jasmin Brown, shines a further light on the lifestyle in a viral TikTok

When asked in the video what a submissive woman ‘does for her man’, Jasmin says: ‘Everything. Just making sure [he gets] all the things that he wants, and I pretty much read his mind.

She adds: ‘You know, I love to see him eating the meal that I cook. I love seeing him sleep easier every night. Like clockwork, I scratch this man’s back to sleep.’

She adds that she gets total fulfilment from looking after her husband, children and home, describing it as her ‘calling’.

Another ‘tradwife’ TikTok creator, esteecwilliams, regularly posts videos about being a traditional housewife, who relies on her husband financially. Estee pointed out that the arrangement suits the couple in a video featuring her and husband.

A caption across the screen reads: ‘So he pays all the bills and he cooks and cleans?’

The caption for the video notes: ‘It works for us.’

However, the lifestyle and the way it is promoted on social media has been criticised by those who accused submissive wife content creators of presenting a fantasy of traditional life as a homemaker, rather than the reality.

According to a video by TikTok creator Matzko Minute: ‘Tradwife TikTokkers have a misplaced nostalgia for an imaginary past.’

Commenting on some of the popular images used in tradwife content, including photos of film stars including Brigette Bardot, and imagery from 50s films, he noted that many of the videos feature iconic advertisements from that era.

He said: ‘[They show] life as a woman, as imagined by Mad Men… if the tradwife lifestyle floats your boat, by all means go in with that life. But don’t live it according to the unrealistic expectations that were invented by men and for men.’

The content has become so prevalent that it even inspired a thread on Mumsnet, with a woman sparking a debate after asking people what they think about the growing trend towards women being ‘submissive’ to their male partners.

Responses were polarised – while some respondents agreed it is ‘crazy’, others said they ‘like to serve’.

Writing on Mums net to garner opinions on the topic, the anonymous UK-based poster said: ‘I’m seeing this everywhere on social media atm. Young women talking about returning to the “natural feminine state” of being “submissive” to your partner. It seems to include leaving your job, becoming a stay at home wife (or even girlfriend), cooking and cleaning for your partner, tending to all his needs, and leaving him in control of all the finances and difficulty of life. 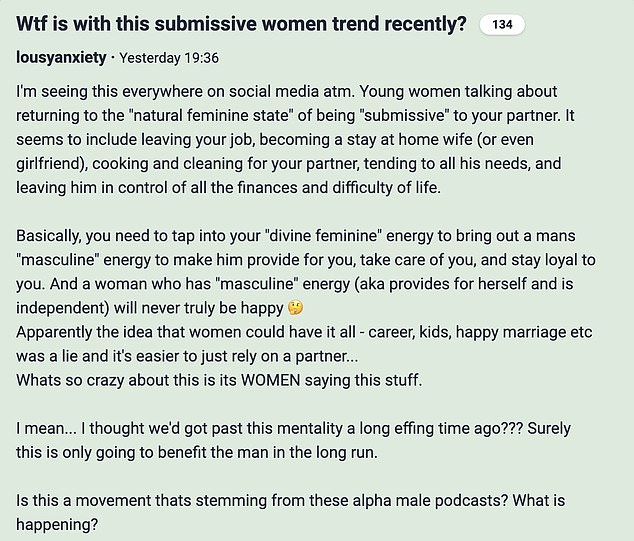 An anonymous, UK-based poster took to Mumsnet to ask people for their thoughts on the growing ‘submissive women’ trend, which sees women becoming stay at home partners who devote their lives to look after their husbands and boyfriends

‘Apparently the idea that women could have it all – career, kids, happy marriage etc was a lie and it’s easier to just rely on a partner…

‘Whats so crazy about this is its WOMEN saying this stuff.

‘I mean… I thought we’d got past this mentality a long effing time ago??? Surely this is only going to benefit the man in the long run.

‘Is this a movement thats stemming from these alpha male podcasts? What is happening?’

One wrote that by making the choice to be submissive, she was being a feminist, saying: ‘The point is because of feminism we can choose this lifestyle. I like to serve my husband by cooking, cleaning, running the home, etc. I’m still a feminist, we are equal partners and we respect each other.’

Another said that people should be respected for their choices, writing: ‘You know what, this goes against every ideal I have. I am very independent.

‘But so what. Who are any of the people in this thread, someone to tell someone to live their lives.

‘If they are happy then leave them be. Judge your own life.’

Some posters revealed that they live a submissive lifestyle, while others said it is up to the individual, and another questioned why people may try to adopt that lifestyle

Another noted that they had seen that people are into the trend, but questioned whether it is particularly problematic, writing: ‘A lot of young women seem to be into this type of thing, albeit not as extreme and dangerous as some of the ideas on the thread.

‘But the masculine/feminine energy thing seems popular. I put it down in part to rebellion against the values they’ve been taught by their mothers, a fad that may appear romantic in theory, but would very quickly lose its appeal if they put it into practise.

‘Especially when they realise no matter how much ‘feminine energy’ you pour into ‘your man’ he’s still going to be Joe Average from Slough, no more capable or willing to ‘look after you’ than he was if you hadn’t bothered.’ 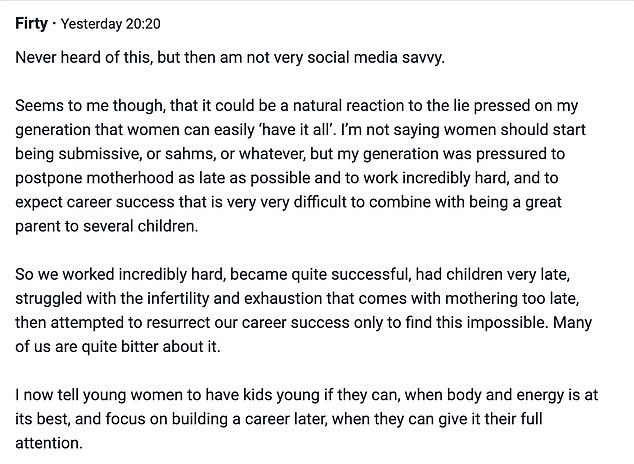 Respondents shared a variety of opinions, with some suggesting that the movement could be a backlash to the idea that ‘women can have it all’, and combine full-time work with motherhood

Meanwhile, others noted that similar trends seem to appear every few years. One said: ‘ Oh this comes around every ten years or so – used to be “surrendered wife” and there were books you could buy. Used to fascinate me. How does this work with an abusive man who spends all the family money on himself and doesn’t come home for three to five days at a time – my ex H at the time.’

Some thought it could be a reaction to the idea that ‘women can have it all’, as people discover that working full time with children is not the sustainable lifestyle they were told it would be.

As one explained: ‘Seems to me though, that it could be a natural reaction to the lie pressed on my generation that women can easily ‘have it all’. I’m not saying women should start being submissive, or sahms, or whatever, but my generation was pressured to postpone motherhood as late as possible and to work incredibly hard, and to expect career success that is very very difficult to combine with being a great parent to several children…Many of us are quite bitter about it.’

Others felt more strongly about the concept, with one respondent adding: ‘Well some women are lazy and want an easy life and they see behaving like this as their meal ticket. Not the life for me or my DH, he would lose all respect for me if I suddenly changed personality and became subservient. I’d lose respect for me!’

Another noted that the trend tends to pop-up every few years, adding: ‘Oh this comes around every ten years or so – used to be “surrendered wife” and there were books you could buy. Used to fascinate me. How does this work with an abusive man who spends all the family money on himself and doesn’t come home for three to five days at a time – my ex H at the time.’