Portraying a fake wife of two men, Love In Contract (WT) tells the story of an employee of a helper service. Her job is to pretend as the wife of single men who need companions to join them in gatherings.

Playing the role of Choi Sang Eun the woman with an interesting job is Park Min Young. Sang-eun is your ideal woman with perfect looks, abilities and charms. She embodies a woman raised perfectly since birth. Thus, her peculiar career draws interest as to why she chose it.

Subsequently, expounding on her contract marriage service, Park Min Young is featured in a teaser video. There she is seen customizing her appearance well depending on her client.

She can go casual, business-like, or filial; her pretension changes according to the needs of the clients who need an urgent wife for a short time.

The Dashing Clients In Love Contracts

Meanwhile, Go Kyung Pyo plays the role of the mysterious Jung Ji-ho, who has a long-term marriage contract with Choi Sang-eun. Jung Ji-ho has been in a fake relationship for five years, but he is still a mysterious person whose job, hobby, and personality are unknown.

The production team also shares their thoughts on Go’s transformation on this project.

“Go Kyung Pyo surprised the staff by showing his transformation into a mysterious long-term customer Jung Ji-ho from the first filming through perfect character research. His colorful charms will pour out through Jung Ji-ho, so please look forward to it.”

Korea’s representative superstar Kang Hae-jin (Kim Jae Young) is sketched as an idol-actor who has become famous beyond Asia and is in the process of conquering Hollywood.

Known to be a self-made man who diligently worked hard to reach his status, Hae-jin confronts a huge wave of rumors putting him in trouble. Because of that, he sets out to become a new client of Sang-eun.

In the photos released by the production team, Kim Jae Young embodies his superstar character with a neat outfit and hairstyle. Even his gaze is charismatic. 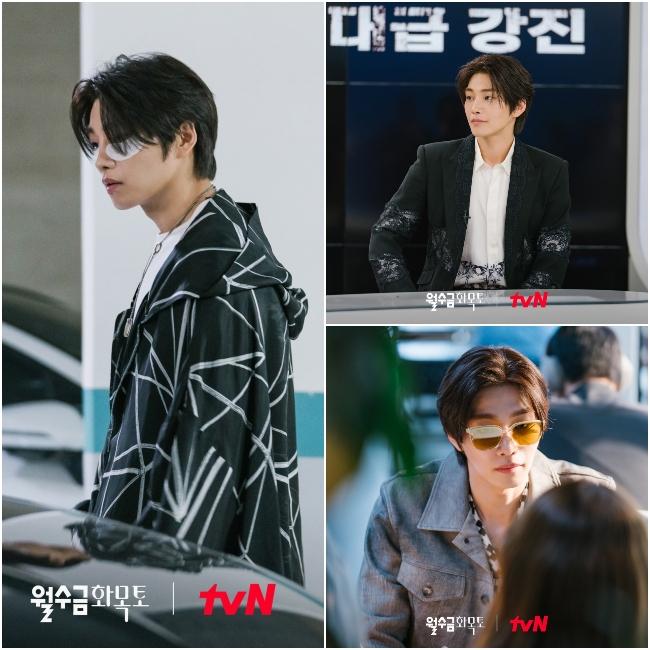