The Supreme Court judge delivering his verdict on whether Chris Dawson murdered his wife Lynette has said there is ‘no evidence’ that the accused was physically violent toward her.

Justice Ian Harrison SC has been reading through his written reasons for his verdict for more than three hours on Tuesday describing some of the evidence in Chris Dawson’s defence during the trial as ‘fanciful, absurd and lies’.

‘I am satisfied beyond reasonable doubt Lynette Dawson never telephoned Christopher Dawson after 8 January 1982 and … that she did not leave her home voluntarily,’ Justice Harrison told a packed courtroom in Sydney.

The verdict – which is still being delivered – came amid tense anticipation from members of Lynette’s family, dressed in pink, and Dawson, who was accompanied to court by his brothers.

In a blow for the prosecution, Justice Harrison rejected evidence Dawson had a tendency to be physically violent towards Lynette.

Friends, colleagues, neighbours and an employee of Lynette Dawson had testified they had seen her with bruises, heard her claim her husband had assaulted her, or witnessed him doing so.

There were tense scenes as Chris Dawson (right) and his brother Peter (left) arrived at the NSW Supreme Court for the murder trial verdict on Tuesday. 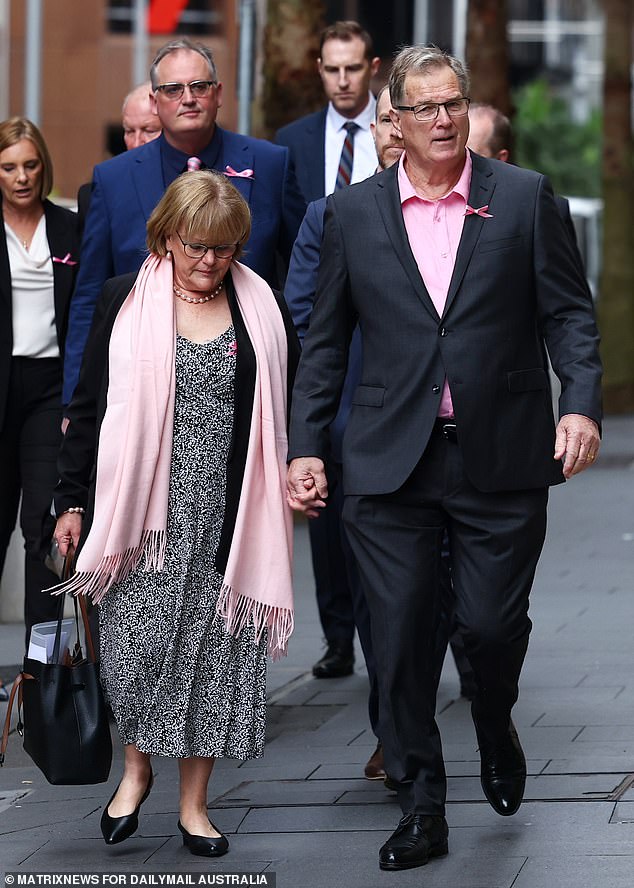 Dawson was described during a summary of the Crown case by His Honour as ‘an unfaithful and violent man’.

The judge also said one of Chris Dawson’s relatives, his brother-in-law Ross Hutchins, had falsified an alleged sighting he had made of Lynette Dawson at Gladesville, just months after her disappearance, and that the sighting was a ‘fabrication’.

Discounting all other alleged sightings of Lynette around Australia over the years, His Honour said, ‘I am satisfied that none of the sightings were genuine.

‘I am satisfied beyond reasonable doubt that Lynette Dawson is dead and that she died on or about 8 January 1982 and that she did not voluntarily leave her home,’ he said.

The proposition that Lynette may have abandoned her family was ‘ludicrous’, the judge found.

While calmly reading out his judgment, Justice Harrison said he was willing to believe ‘beyond reasonable doubt that Chris Dawson’s evidence he had received a call from Lyn at a swimming pool on the day after his wife’s disappearance was ‘a lie’.

Justice Harrison also found that Chris Dawson’s accounts of purported phone calls from his wife after her disappearance ‘beyond reasonable doubt … are lies’.

‘I do not accept Lynette Dawson … would continue to remain in contact with the very person who was … the reason for her departure,’ Justice Harrison said. ‘The contention … is simply absurd.’

The judge described the evidence of the schoolgirl babysitter JC, with whom Chris Dawson had an affair, as mostly reliable and that her account of being groomed for a sexual relationship as believable.

‘She had been swept up … and was confused and conflicted,’ he said and found that JC’s evidence had not been corrupted by her subsequent divorce from him.

‘I am satisfied that Mr Dawson was obsessed with JC and with the fear of losing her. He decided he would end his marriage and move on with JC,’ he said.

‘That does not stand alone to prove that he murdered his wife.’

Justice Harrison described evidence from two women who related stories allegedly told to them by Lynette Dawson of violence against her by the accused as unreliable.

He said the women had been influenced by the Teacher’s Pet podcast.

However he said the account by Lynette Dawson’s next door neighbour, Julie Andrew, of seeing Chris Dawson pushing Lyn up against a trampoline and screaming at her shortly before she went missing he found to be true.

So many media and supporters attended the court verdict, a second court room was opened up to accommodate the crowd.

For the first time in the trial, the accused’s identical twin brother Paul was present at court and in a mass of media outside the court there was a brief scuffle between a cameraman and the twins’ older brother, Peter.

Peter shoved a TV cameraman and saying ‘get out of the way’ as reporters crowded their path. 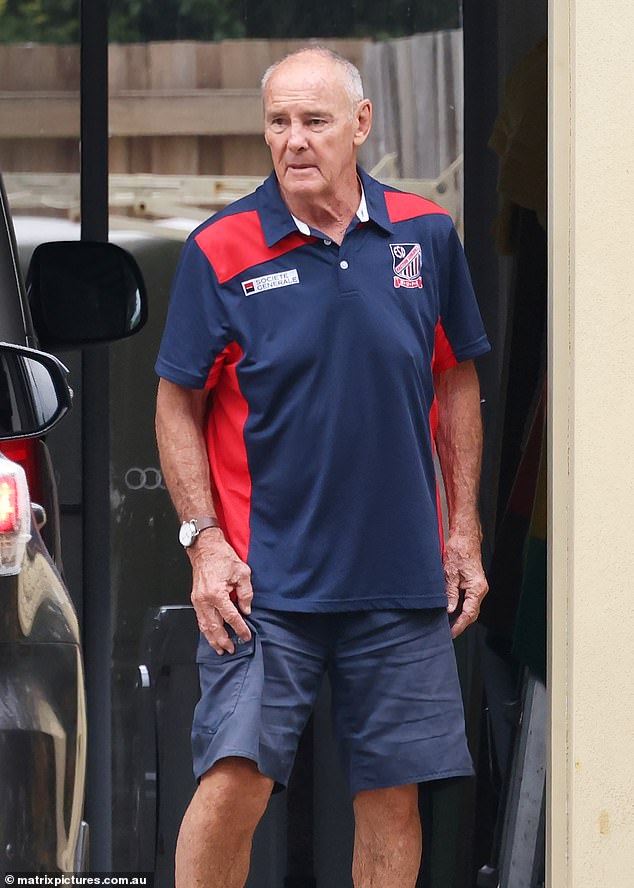 Accused murderer Chris Dawson (above) at his Sunshine Coast home on Sunday before he flew to Sydney to face the judge’s verdict of his guilt or innocence in the murder of his first wife, Lynette 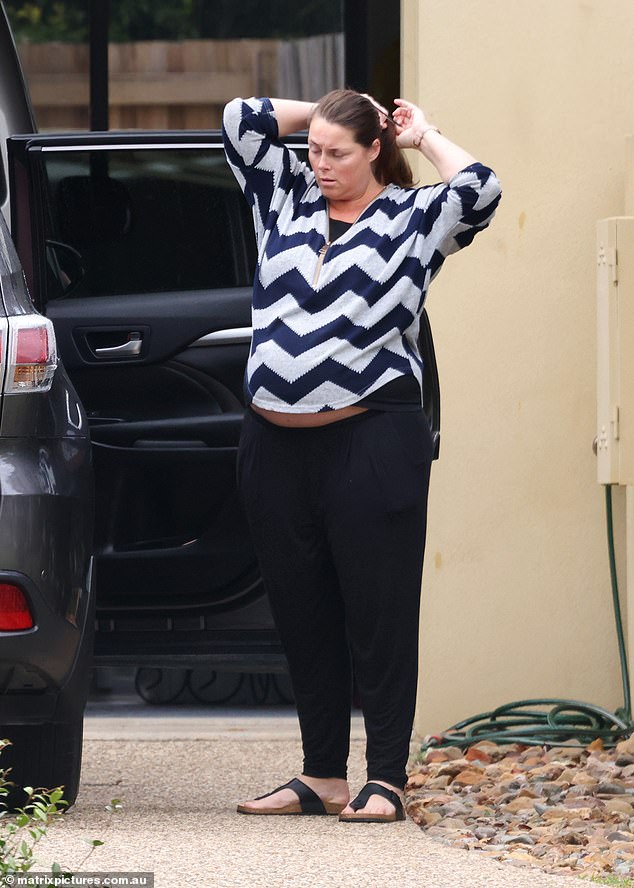 Chris Dawson kept silent as he was bombarded with questions about his feelings and whether he was prepared for the possibility of jail time.

Chris Dawson had left his Sunshine Coast home in Queensland to fly to Sydney for the verdict, having spent the past seven weeks on bail while Justice Harrison deliberated on his decision.

On Sunday, as his old team Easts Rugby Union played in grand finals at Coogee Oval, Dawson had sported a club shirt and enjoyed a visit from his daughter Shanelle at his home. 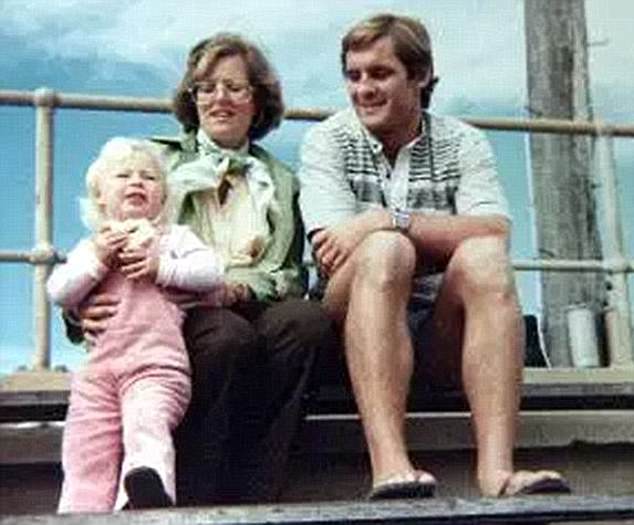 Lyn and Chris Dawson pictured above with one of their daughters

Both Dawson and his identical twin brother Paul played for Easts before switching to the Newtown Jets rugby league side in 1972.

Justice Harrison conducted a judge-alone trial and is giving a lengthy summary of the reasons for his decision.

Mr Dawson, according to his defence, suffers from a fractured hip and and a possible brain injury sustained from his years playing rugby.

The verdict is also momentous for the family of Lyn Dawson, who have invested  much time and effort in seeking justice for the 33-year-old mother of two young girls who vanished without trace on January 8 or 9, 1982.

Lyn’s sister, Pat Jenkins, her brother, Greg Simms, and the missing woman’s niece Renee Simms and nephew David Jenkins have had their lives on hold for the 10-week trial, the weeks since as Justice Harrison has deliberated and, indeed, the empty decades since Lyn vanished. 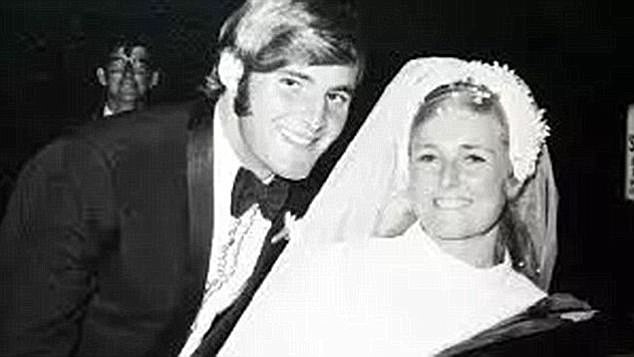 Chris and Lynette Dawson (above) on their wedding day in 1970 when they appeared blissfully happy, but their marriage would hit the rocks when he took up with the teenage babysitter

His Easts supporter polo shirt is several years old, and the weekend’s results were not a conclusive portent for what was to come.

Easts beat Sydney University in third grade, levelled with old rival Randwick in an 13-all draw in the same division, and won 21-17 against Randwick in the first grade Colts.

Daily Mail Australia understands Dawson is not a club member and hasn’t been to Easts clubhouse since 2009. 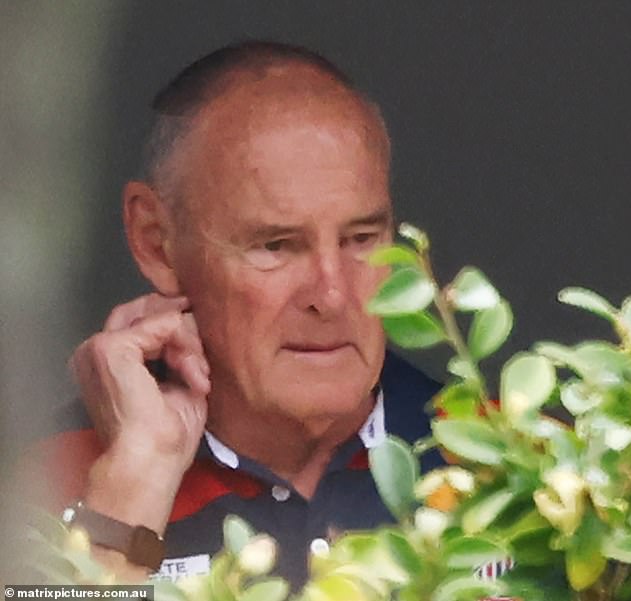 Chris Dawson, 74, (above) pictured on the Sunshine Coast last weekend before returning to Sydney for the verdict on his trial for murder 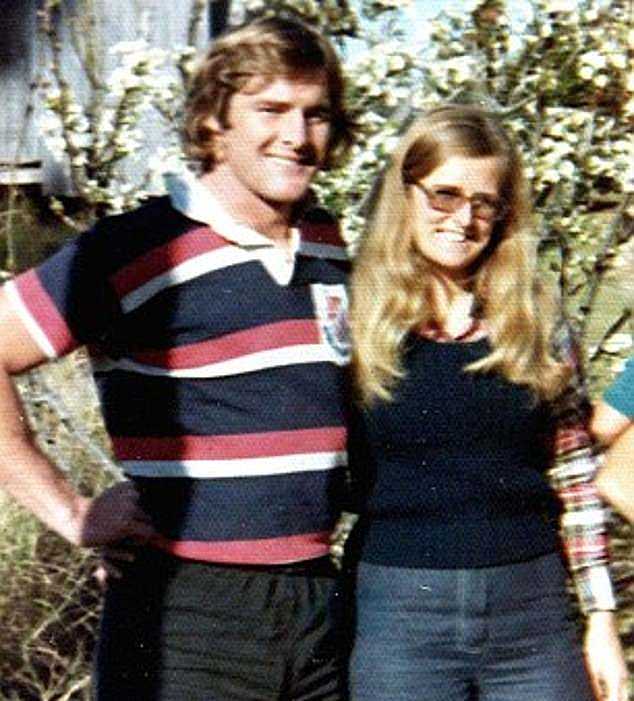 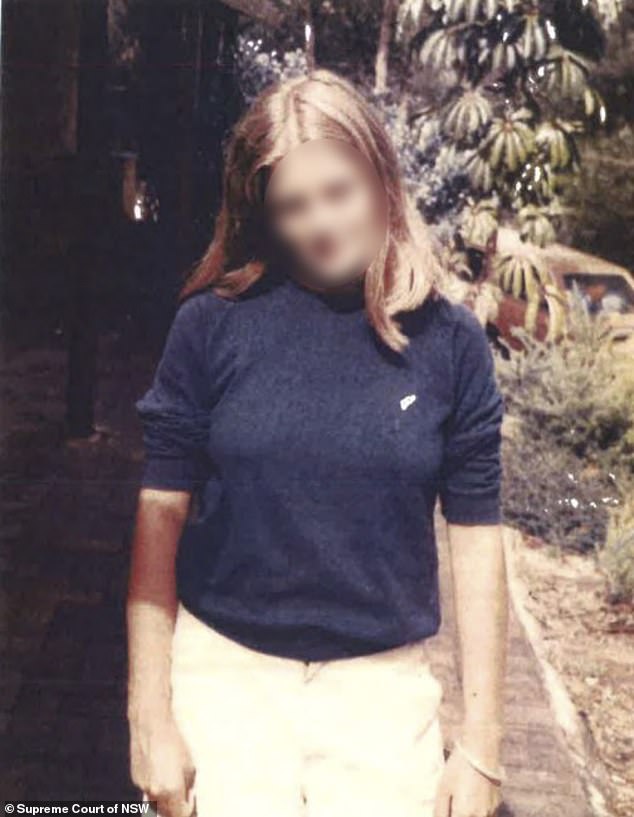 The trial heard Chris Dawson was ‘besotted ‘ with JC, the schoolgirl babysitter who became his second wife and testified at his trial about his controlling behaviour

Mr Dawson’s eldest daughter Shanelle, who was four when her mother disappeared was pictured packing her car as she left his house on Sunday, after publicly revealing she still loves her dad.

Four years ago, Shanelle had broken down on national television, saying ‘It’s not looking good for my father, I will be honest to say’.

Chris Dawson was arrested and charged with Lyn Dawson’s murder in late 2018, pleaded not guilty to the charge and has always maintained his innocence.

Lynette Dawson’s disappearance from her Bayview home on Sydney’s northern beaches was the subject of the hit podcast, The Teacher’s Pet, which was played during the lengthy trial.

During the trial, crown prosecutor Craig Everson SC claimed Mr Dawson’s motivation for murdering his first wife and disposing of her body was to have an ‘unfettered relationship’ with a school student, known in court as JC, who became their teenage babysitter. 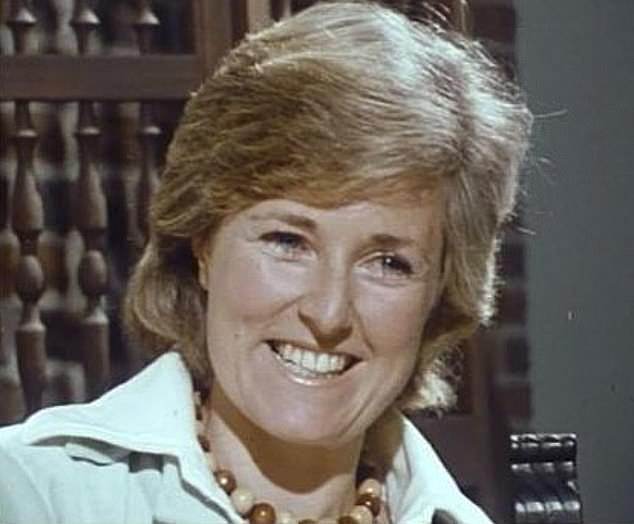 The family of Lynette Dawson has been asking for years about her disappearance and whatever the verdict on Tuesday, they still hold out hopes of her remains being found 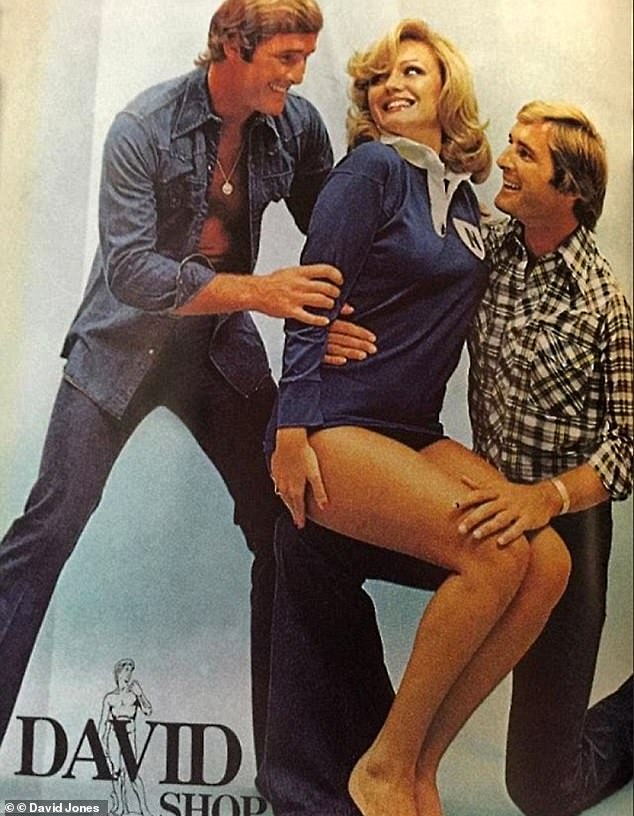 The court heard that Mr Dawson, who was twice JC’s age, became utterly infatuated with her and conducted a sexual affair, eventually moving her into the family home after Lyn vanished.

Lynette Dawson’s body has never been found and Mr Everson’s circumstantial case included that the accused had disposed of her during a ‘window of quiet seclusion’ sometime before or after meeting Lyn’s mother at the pool, and collecting JC from northern NSW.

The trial heard two separate allegations of Mr Dawson suggesting he hire a hitman to kill Lyn, one by a former Newtown Jets team-mate and one by JC, who became his second wife.

JC told the court repeatedly Mr Dawson had ‘groomed’ her, then ‘installed’ her in the house and the marital bed, where she became ‘a sex slave’, as well as housekeeper and mother to his two daughters. 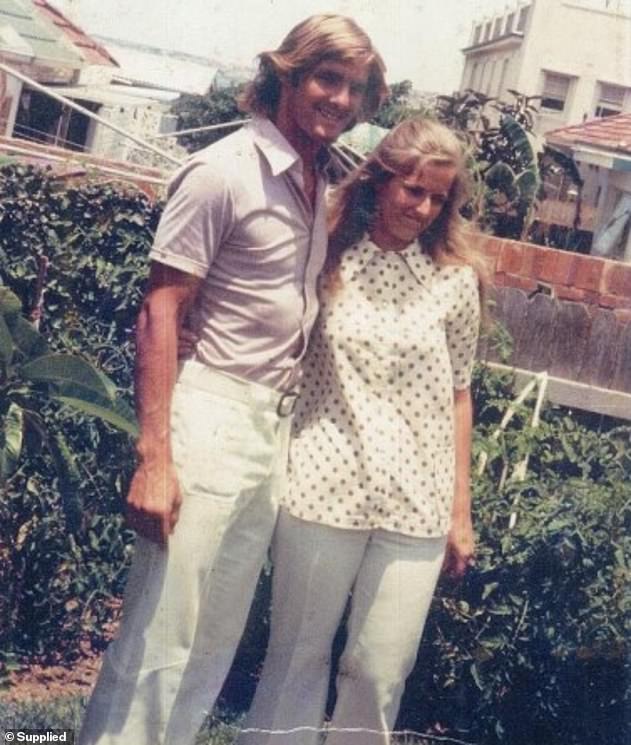 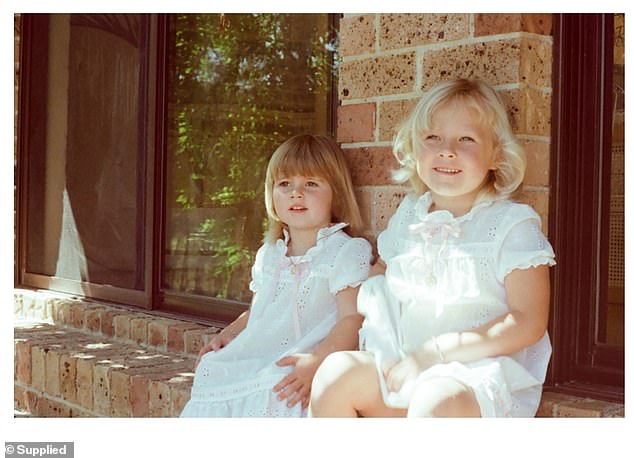 Lynette’s two daughter Sherryn and Shanelle posed for photographs by a portrait artists who would produce charming drawings of the girls, only to discover that Lyn had vanished and Chris didn’t want them

In the house were all of Lyn’s belongings, including wedding and engagement rings, clothes, eyewear and her nursing badges.

Friends, colleagues, neighbours and an employee of Lynette Dawson testified they had seen her with bruises, heard her claim her husband had assaulted her, or witnessed him doing so.

Mr Dawson’s barrister, Pauline David, argued that the young mother had simply up and left and had gone away of her own free will, and was still alive after not contacting her mother or other family since January 1982.

Ms David cited five alleged sightings, including in the Sydney suburb of at Gladesville, working at a  hospital, at a hotel near Lake Macquarie and crossing the road during Princess Diana and Prince Charles’ 1983 royal tour.

Ms David surmised Lyn Dawson could have ‘created a new life’, met with misadventure and since died, and even committed suicide.

Lyn Dawson’s family flagged the fact that despite the conclusion of the trial with Justice Harrison’s verdict, they will not ever give up on finding her remains.

‘Either way, this isn’t over until we have Lyn home.’

A French court on Thursday substantially lowered a...

A French court on Thursday substantially lowered a...